This is Redby Street in Manchester, a short insignificant street in the Openshaw district.  It connects Ashton Old Road and Whitworth Street and is surrounded by wasteland. There doesn’t seem to be that much in Openshaw these days, but at one time, this area – indeed the whole of East Manchester – was a hive of industry with many large engineering works and other factories and collieries. It was also heavily polluted!

Railway lines in roads are back in vogue in Manchester again thanks to the Metrolink, and while street running of trains wasn’t common in the city, there were numerous level crossings. This piece of line was a combination of the two and linked the steelworks on North Street (later English Steel) with the other works on Whitworth Street. 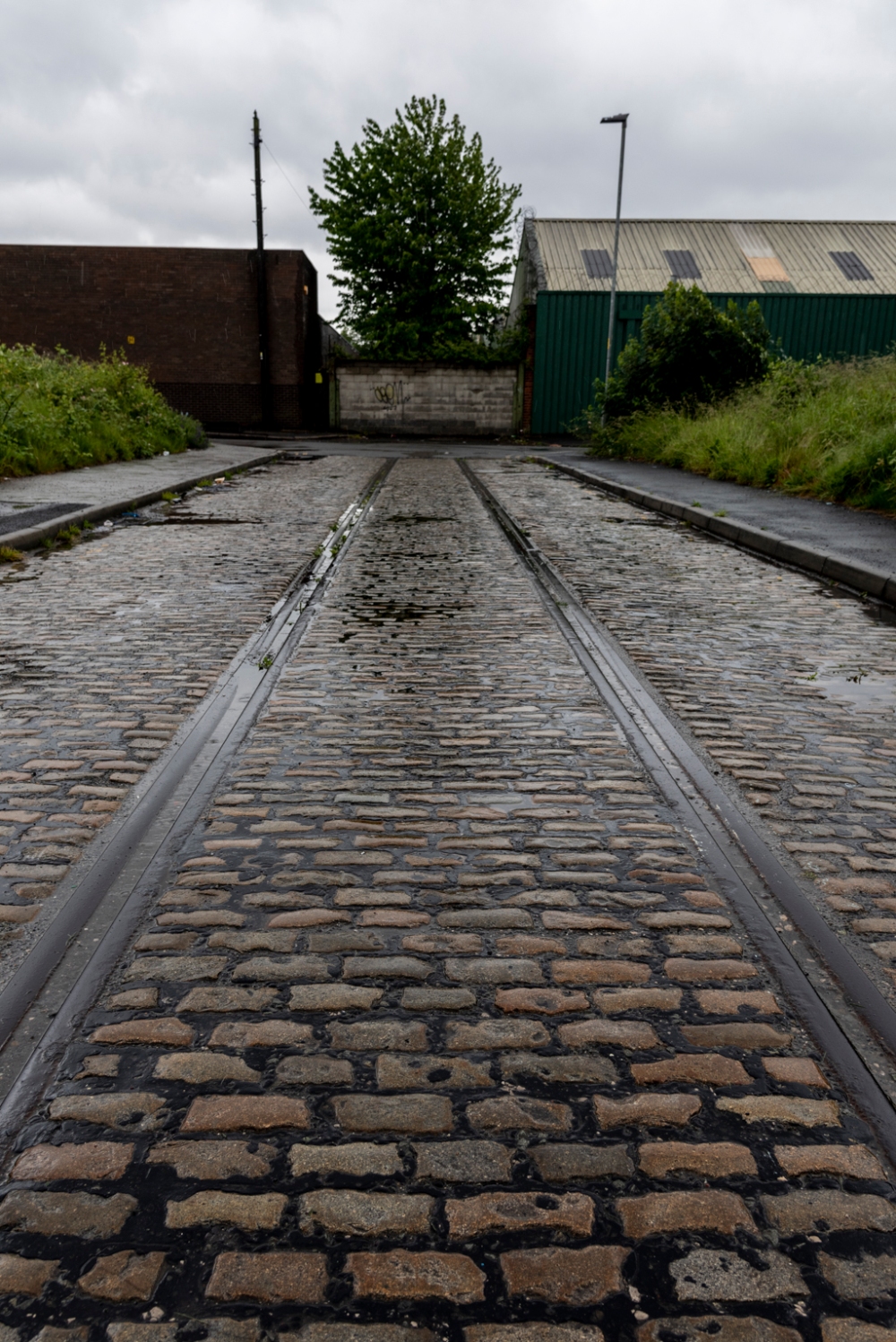 Looking south – the path to the mainline has been walled up and is now overgrown.

Trying to piece together a history of the works from online sources is like trying to pleat fog, and I don’t really have the time to do primary research at the moment. For such a significant industrial site there is precious little online about it. However Ian Buxton’s authoritative book ‘Battleship Builders’ was a useful setting off point as the Armstrong Whitworth works was once a massive armaments factory that specialised in naval guns and armour. Grace’s guide was useful, as it always is!

This aerial views of the works show a huge site and the railway line linking the two sites. The earlier Whitworth Street works produced armour plate, gun barrels, gun housings and all manner of other engineered products. The North Street works was built in 1907, and it is somewhat unclear as to what was produced at each plant , but there are description of hot ingots passing by rail between the two sites. A photograph of a train crossing Ashton Old Road can be seen here.

Complete ingots were also shipped by rail to other customers: https://www.gettyimages.dk/detail/news-photo/ton-ingot-mould-loaded-on-a-specially-constructed-sling-news-photo/159607152

However with the disarmament of the 1920’s work dried up and a consolidation of the armaments and shipbuilding industry took place. Armstrong Whitworth merged with Vickers Armstrong in 1927, and the following year English Steel was formed from those two companies steel making businesses. The Whitworth street site was closed down and demolished in the 1930’s. The North Street works continued in business and made tool steels. 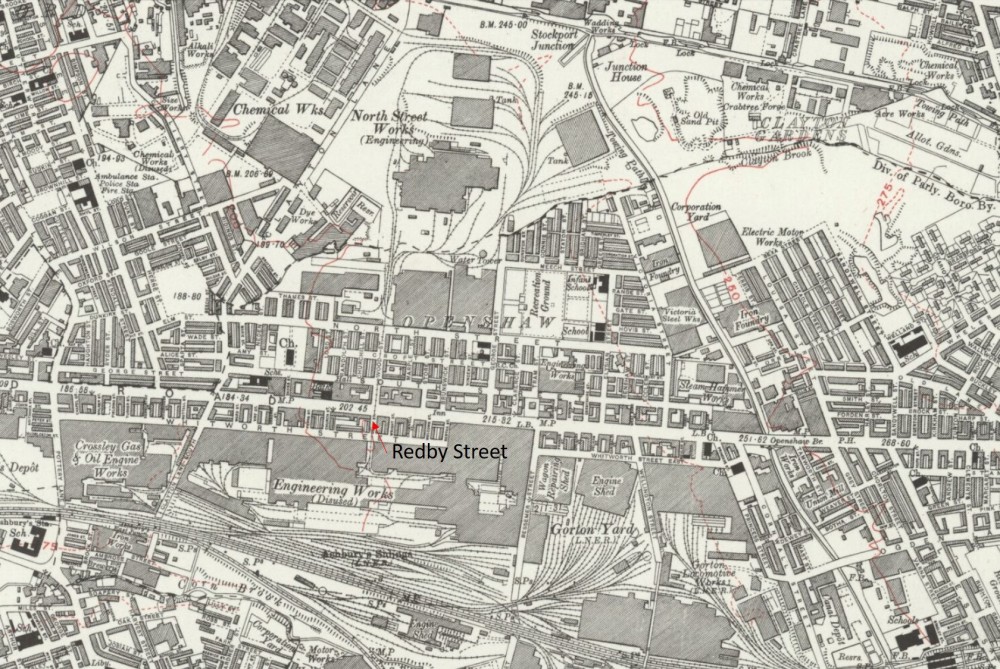 This OS map from the 1950’s shows the line was connected to what were known as Ashbury’s Sidings on the main line running west to east along the bottom of the map to enable access to the North Street Works from both the south and the North west. Not sure why?

After Redby Street, the railway crossed Ashton Old Road and up Wood Street to enter the site on North Street through these gates. One of the gateposts still exists (below). 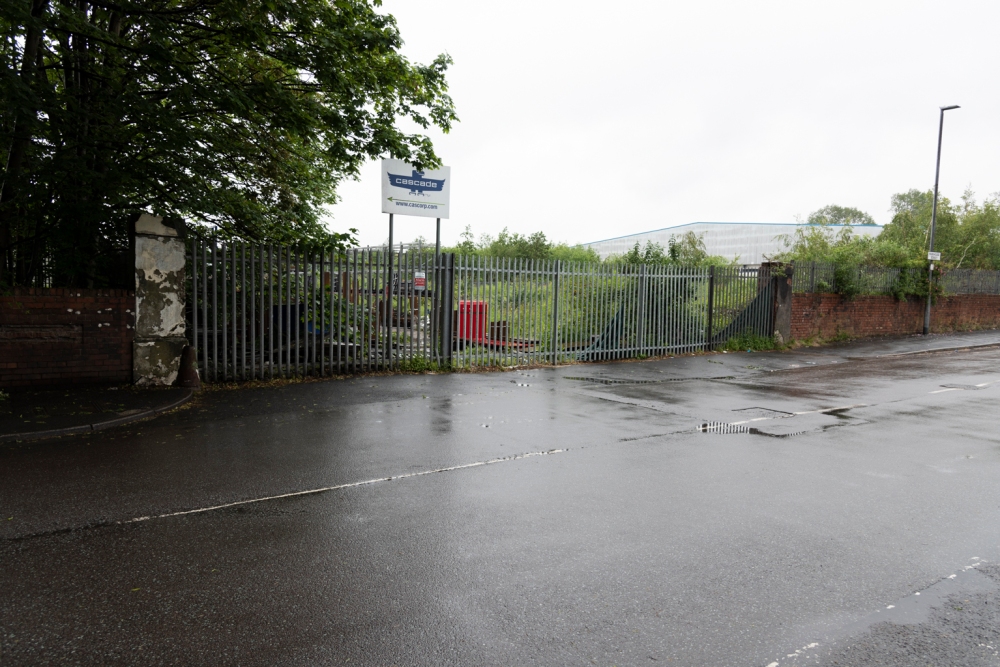 The North Street entrance today, The white gatepost on the left is still there, the one on the right has gone.

Graces guide says that English Steel became absorbed into British Steel in the 1960’s. Edgar Allen then acquired the tool steel division of British Steel in 1972 including North Street which was known as Openshaw Forge. Anecdotal evidence from a former worker on a facebook group suggests this shut in January 1981. A photograph of a locomotive on the site can be found here https://rcts.zenfolio.com/industrial-and-light/industrial-steam/other/hA882C7C1#ha882c7c1.

Some of the North Street works lasted to the 2000’s – if you look at the Google Earth views for 2000 you can see some long sheds north of the site. The 2003 one (not illustrated) shows them having been recently demolished. This area as now home to Thomas Storey – an engineering company – and a steel distribution company. A larger brick built building on the site looks to be 1950’s/1960’s so was probably part of the English Steel works in some capacity. 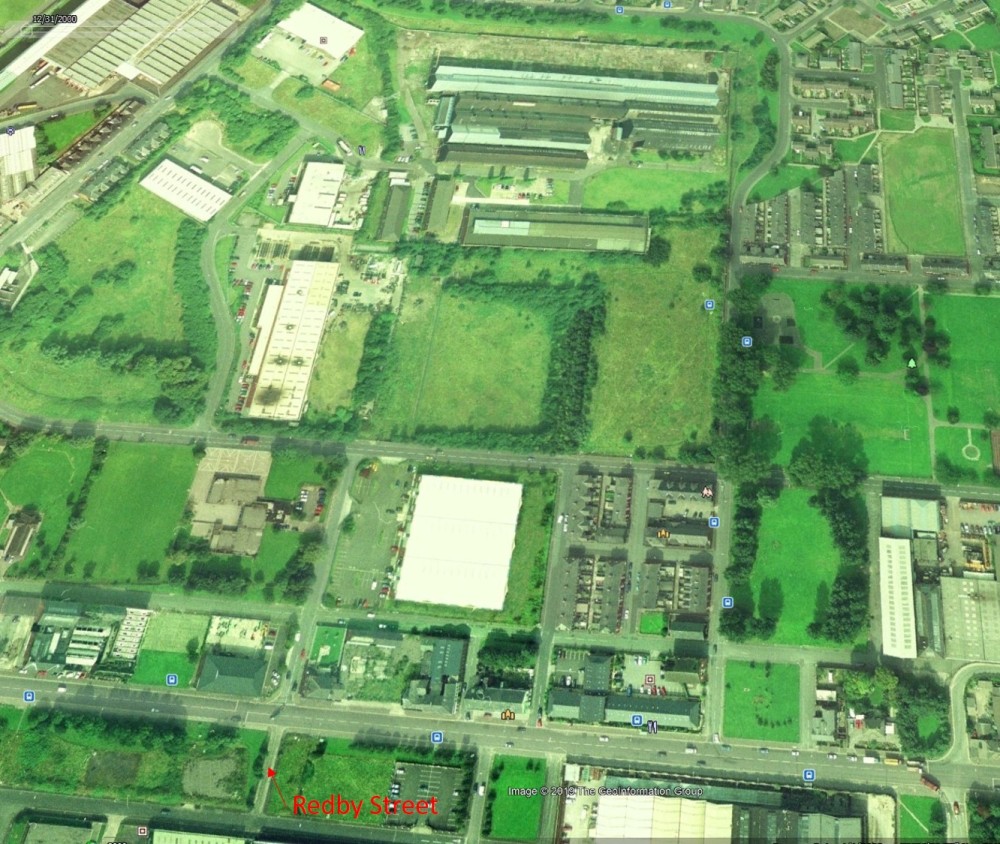 Manchester isn’t known as a steel town like Sheffield is, but as well as the works described above, the Lancashire Steel Corporation had a large steelworks at Irlam on the banks of the Manchester Ship Canal (closed in 1979) and Taylor Brothers built a steelworks in Trafford Park. Through various changes of ownership, part of this still exists producing railway axles.

Interestingly there was another steelworks not far away in Beswick. Richard Johnson & Nephew had been based at the Bradford Iron Works since 1853 and manufactured wire. Grace’s guide states that in “1972 Announced plans to establish a steel “mini-mill” to make billets at Forge Lane, Manchester; the billets would be used in the group’s wire mills.” I’m making a leap of faith here and assuming that this is what became known as Beswick Steelworks and Manchester Steel emerged based at Beswick Steelworks. Manchester Steel closed in 1986. The site was cleared and is now covered by the Etihad Stadium.

The only online photograph I can find of the place is here.