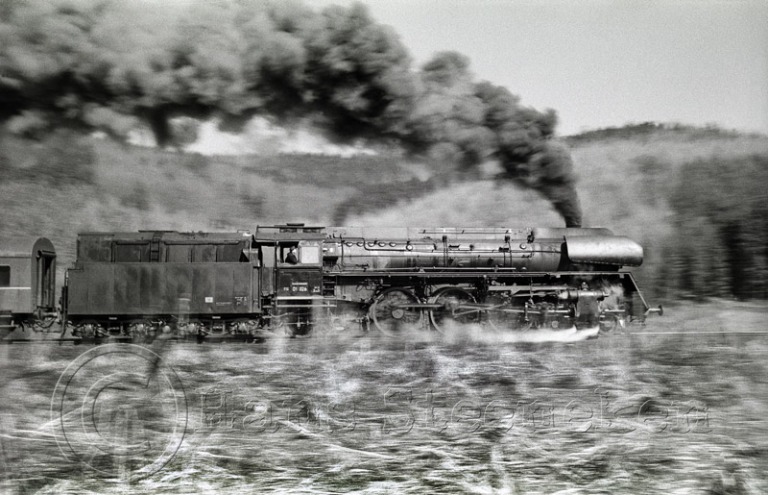 A great thing about having websites (and the internet in general now I think about it), is how information and people have become more accessible. I wrote a blog article a few months back on Hans Steenekens All Trains To Stop, and a few weeks late, Hans contacted me via my blog, and we have exchanged a few emails since (in fact Ian Krause also contacted me after I wrote about him also).

Hans recently sent me this photo that he has kindly allowed me to put up on here. He writes that “For panning shots you need a bit of luck. I never tried it on a single train but usually on four or five and selected the best later on. If I remember well, I used a rangefinder camera (my Leica) because it gave extra space in the viewer, i.e. outside the actual frame. The rectangular focusing aid in the centre of the finder was very helpful to aim and synchronize with the cab as it sped by, because that had to be the middle of the frame. I used a 35 mm lens. A shutter speed of 1/30 sec gave a nice blur. With longer lenses a faster speed worked better. On electrics or diesels it wouldn’t work at all because apart from the blurred countryside there wasn’t much to blur on the loco itself.”

The engine is a 01.5, the DR rebuilt 01 4-6-2. I’ve long been fascinated by the big European steam loco’s as they are just so different to British steam. Having said that , I was interested to read in the current Heritage Railway that Beyer Peacock supplied some engines to Turkey in 1948 that were remarkably similar to the DR Class 50’s.