If, on the off-chance you’re a regular reader of this blog, you might recall me mentioning on a number of occasions that the only things made in Manchester these days are cornflakes and Coronation Street. I’m only half joking here – large scale manufacturing has been decimated while new industries such as media have prospered.

It was a pleasant surprise to read  then that cotton spinning was going to restart in Manchester, 30 years after the the last mill closed. Tower Mill in Dukinfield had been bought by its neighbours in Tame Valley Mill, Culimeta Save-Guard. Culimeta still process synthetic yarn next door and are one of the few remaining Manchester textile mills. 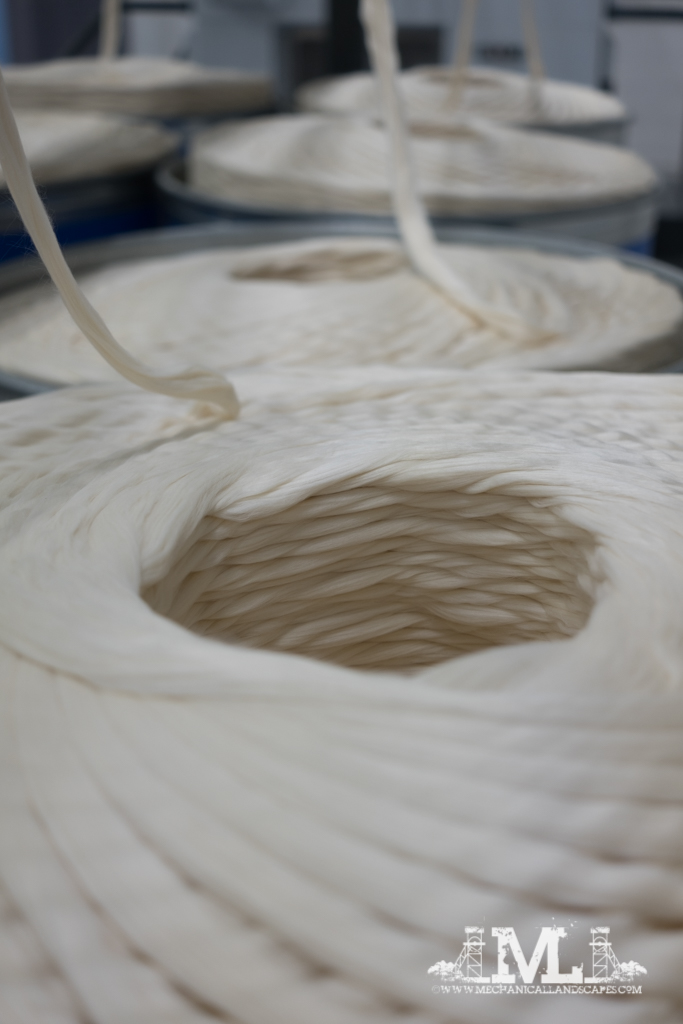 English Fine Cottons was formed by Culimeta to produce the highest quality Cottons for use in high end clothing, and nearly £6 million pounds has been spent on refurbishing Tower Mill (which last spun cotton in 1955) and equipping it with the very latest textile machinery. Alas, this is German made as along with the closure of the Lancashire textile mills went the machinery manufacturers as well.

As I follow English Fine Cottons on instagram, I was pleased to see that an open day was being held, so I put my name down for a spot to see what a new mill looked like. 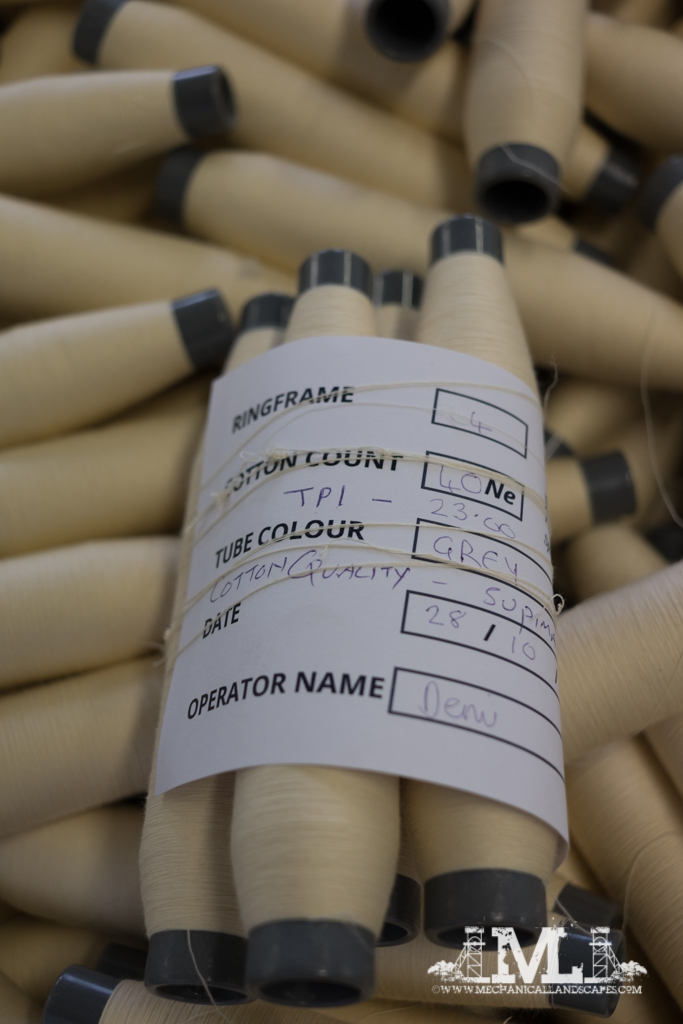 Externally at least, little has changed – it is a listed building after all – but a keen eye will notice the new window frames on most of the windows and the air of tidiness about the place typical of a factory owned and occupied by one and the same entity (I’ve never seen that in a place in multiple occupation).

Leaving the somewhat battered goods lift that took us upstairs to the second floor, we exited into a white painted room and entered the new canteen for a briefing and separating into groups (there were probably 60+ people present), and then off on the tour.

Despite being stuffed full of the latest technology, a spinning mill is still quite noisy process, albeit not as deafening as it would have been when 80 years ago. To that end, I didn’t hear an awful lot of what Jim, the production manager, had to say which was a great shame as he had spent his entire career in the local mills and clearly had an immense knowledge of the process. Plus, I was busy wandering round taking things in and making some photographs.

I’ve taken the captions for these pictures from a video on the company website, it’s well worth a look: https://www.englishfinecottons.co.uk/manufacturing/a-21st-century-mill/ 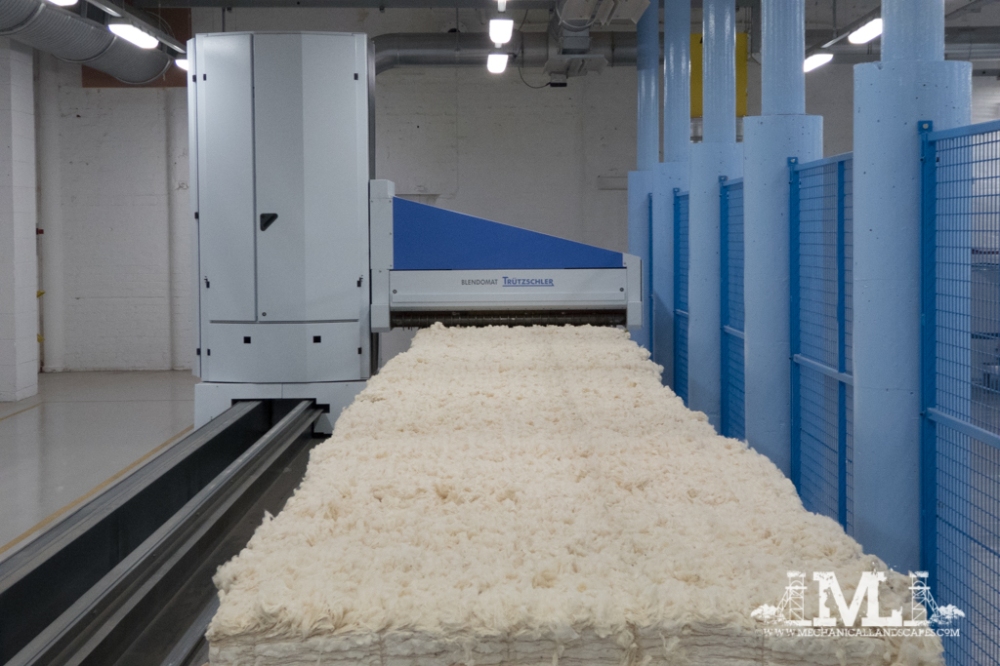 Bale plucker. A real futuristic looking thing. ‘The bale plucker opens and plucks the cotton fibre, moving along the bales and taking small sections from the top of each. It then sends the fibre through the transportation ducts to the blow room where it’s cleaned.’ according to the company’s website

Lap forming (I think). This winds parallel slivers around a plastic core to form a continuous sheet, or ‘lap’ to feed the comber.

Cans of slivers feeding the speed frame. This reduces the thickness of the sliver, applies a ‘holding’ twist and wraps it around ‘roving’ bobbins for spinning. 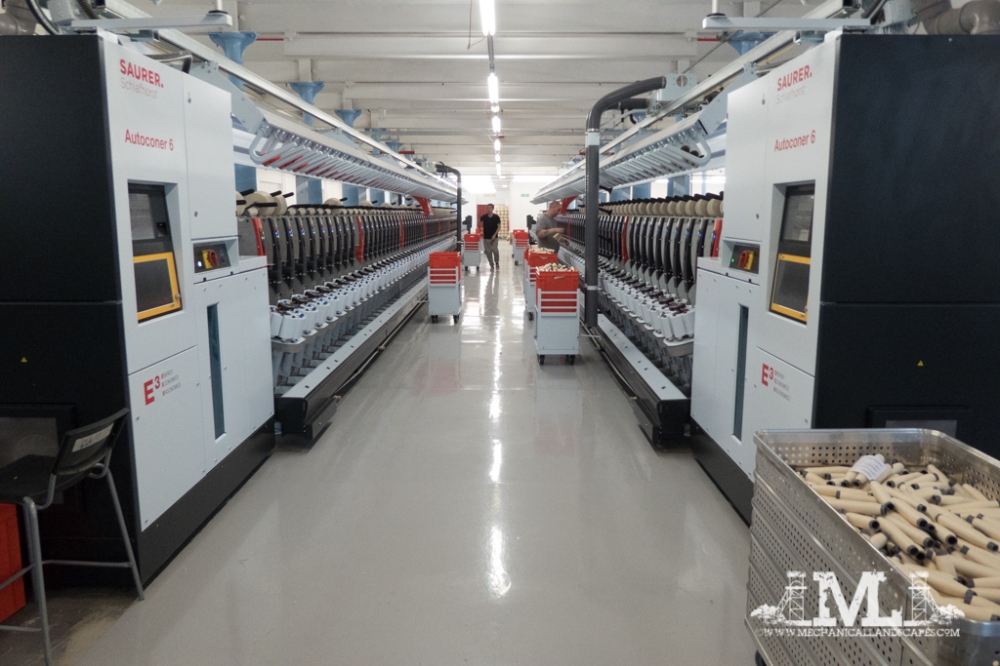 Autoconer – the last stage in the process. This winds the yarn from cops on to cones.

What stands out most was the modernity of the place. OK, so production had only been going a few weeks, so it was still immaculately clean, and no doubt the challenge will be to ensure high standards of housekeeping to keep it that way. But as much of the machinery was shrouded in metal cabinets it looked like a Formula 1 car factory or the aircraft industry. And the level of automation on the machines was staggering. I’m sure that in an ideal world, the company would have chosen a large, single storey portal frame shed to reduce the amount of travel between floors, but that may well have incurred other problems. And it almost seems right that a cotton spinning mill should be somewhere like this, rather than on an anonymous out of town industrial estate.

It was disappointing that all the machinery was German, Japanese and Swiss, I presume because there are simply no British textile machinery manufacturers left.

I’m sure that some clever people have done the calculations and are confident that the business is profitable and sustainable. The market for textiles has clearly changed since the last mills in the area shut in the 80’s with a tendency to more high end clothes and textiles (the market for the high quality fine cottons being spun at Tower Mill) being manufactured in the U.K. nowadays. But with some product being exported, and more machinery on order a promising future could be on the cards.

So thank you to English Fine Cottons for allowing us to mooch around your ‘new’factory, I hope that it becomes a huge success! 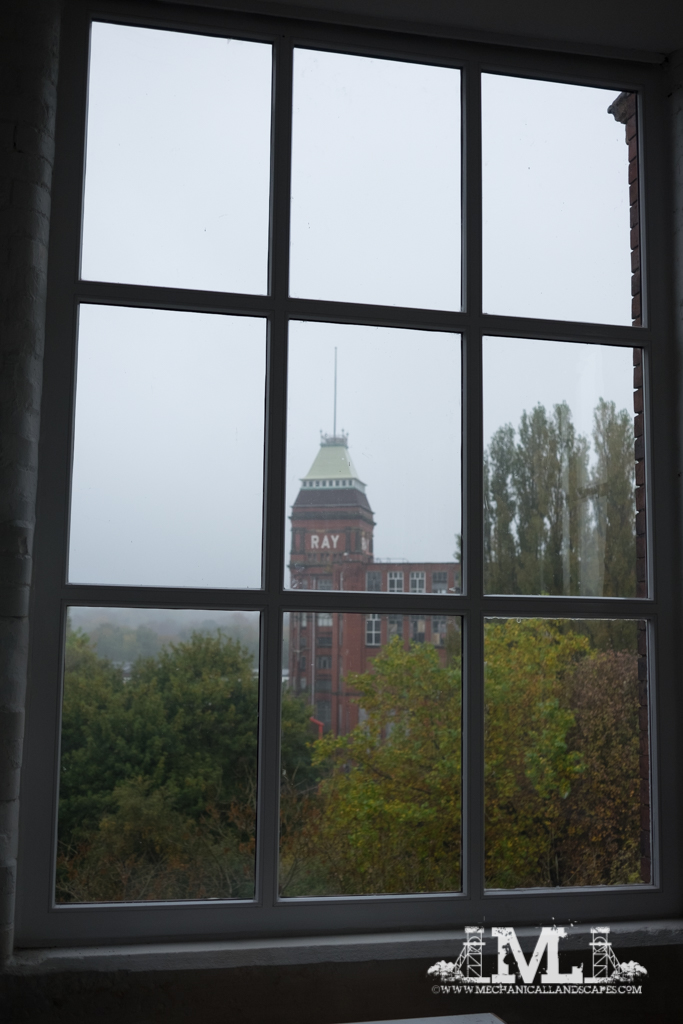 Ray Mill, just round the corner. It was built later than Tower Mill (1908) and was electrically powered from the start. It closed as a spinning mill in 1982, probably one of the last in the area.