People talk about how in the digital age, there is a lot of ‘machine gunning’ of scenes with dozens of photographs taken, and not all with a great deal of care and attention. In looking through the photographs of the Atchison, Topeka and Santa Fe railway it seems that the practice wasn’t unheard of in the days of film. The sheer volume of photographs taken on this trip were astonishing when you consider that it was shot on medium format which has maybe 10-12 shots per roll, as opposed to the 36 on 35mm film. That said, I suppose if you’re an official photographer of the American Government, tasked with documenting the war effort, then your job is to fire away and let someone else pay the bills.

Compared to the majority of the scans from the Chicago and North Western, the ones from the Atchison, Topeka and Santa Fe railway are very flat. As I’ve mentioned before, this isn’t unusual with negatives, and they normally require work in the darkroom or photoshop to liven them up a bit. Clearly there must have been differences either in the film choice or the developing at the time, or possibly in some of the scanning software algorithms more recently.

This has meant that I’ve had to spend some time in Lightroom making some adjustments to them to bring them to life a little. Its hard working on someone else’s negatives as you didn’t see the scene in the first place so you’re making guesses as to how things looked and just how much contrast the scene and its parts should have.

One thing I did notice was how scratched the negatives were. Not so much volume of scratches, but large patches of them in certain area, most noticeable in the first one. Many are affected, and some I’ve managed to get rid of, but not all. 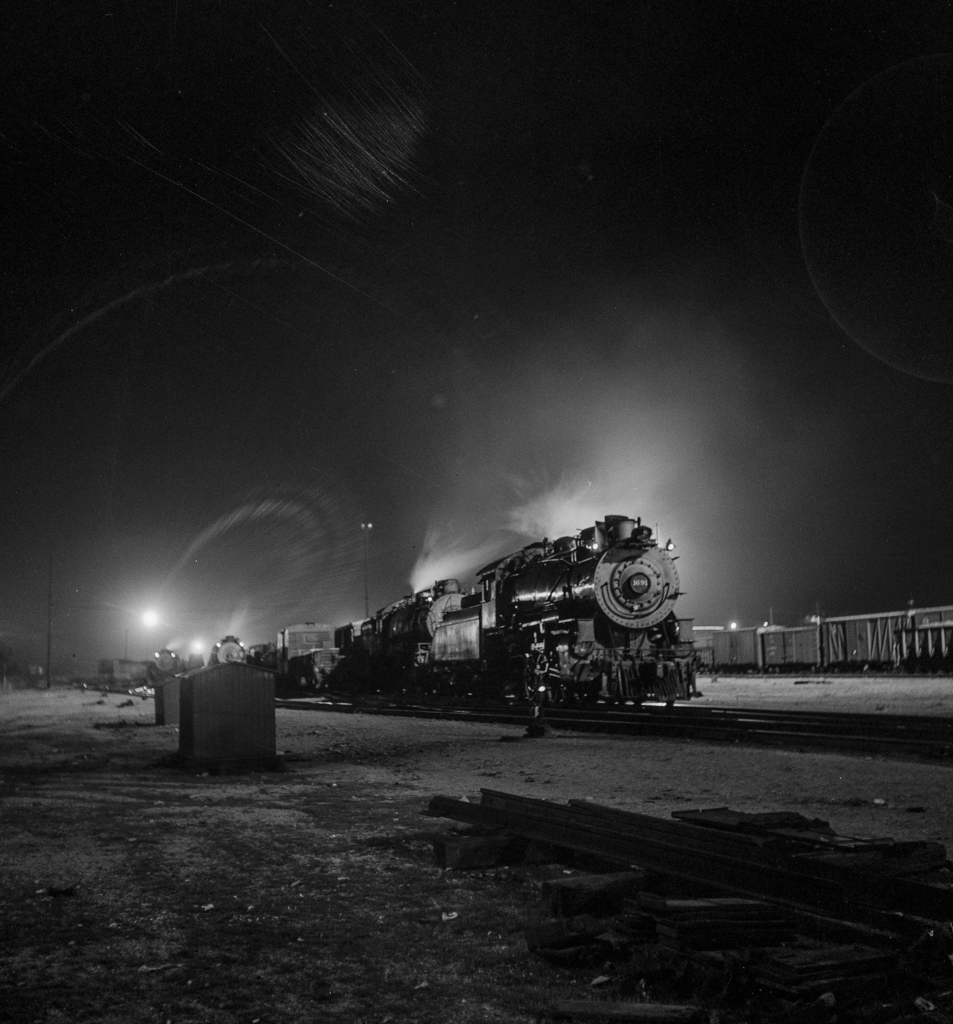 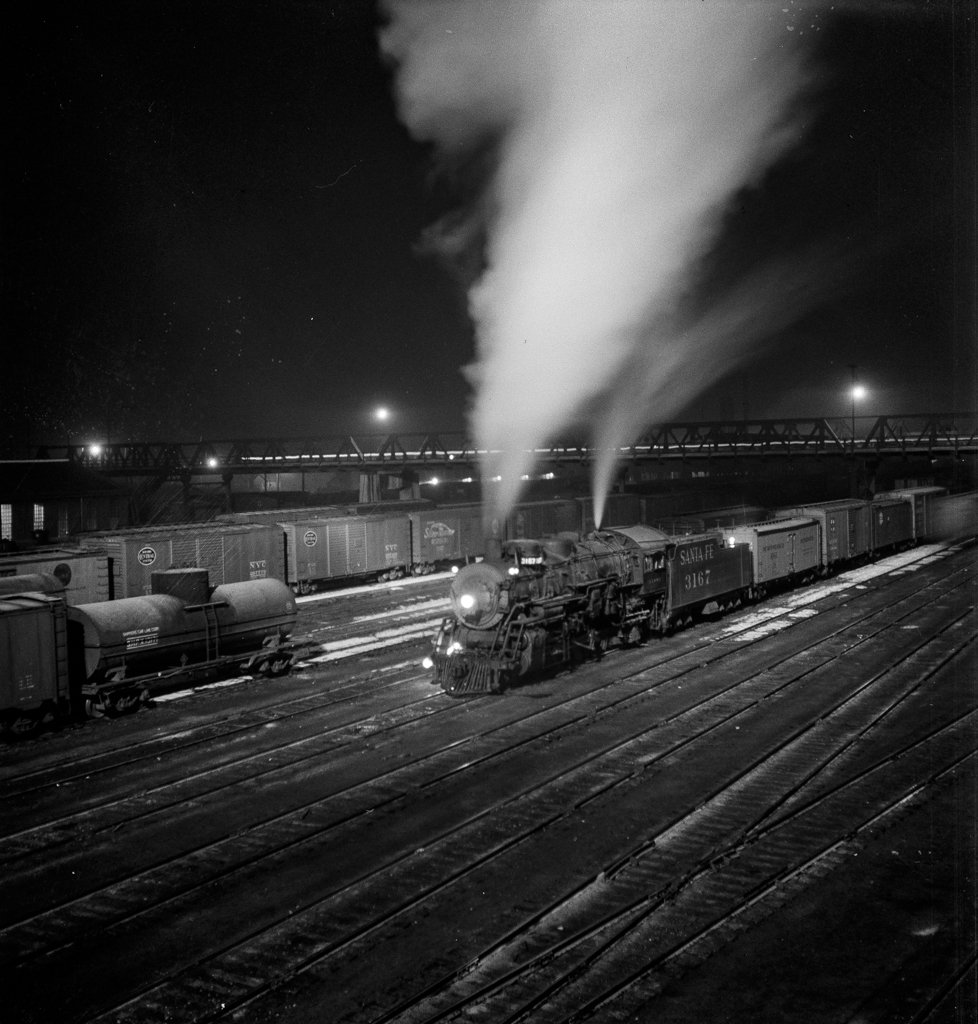 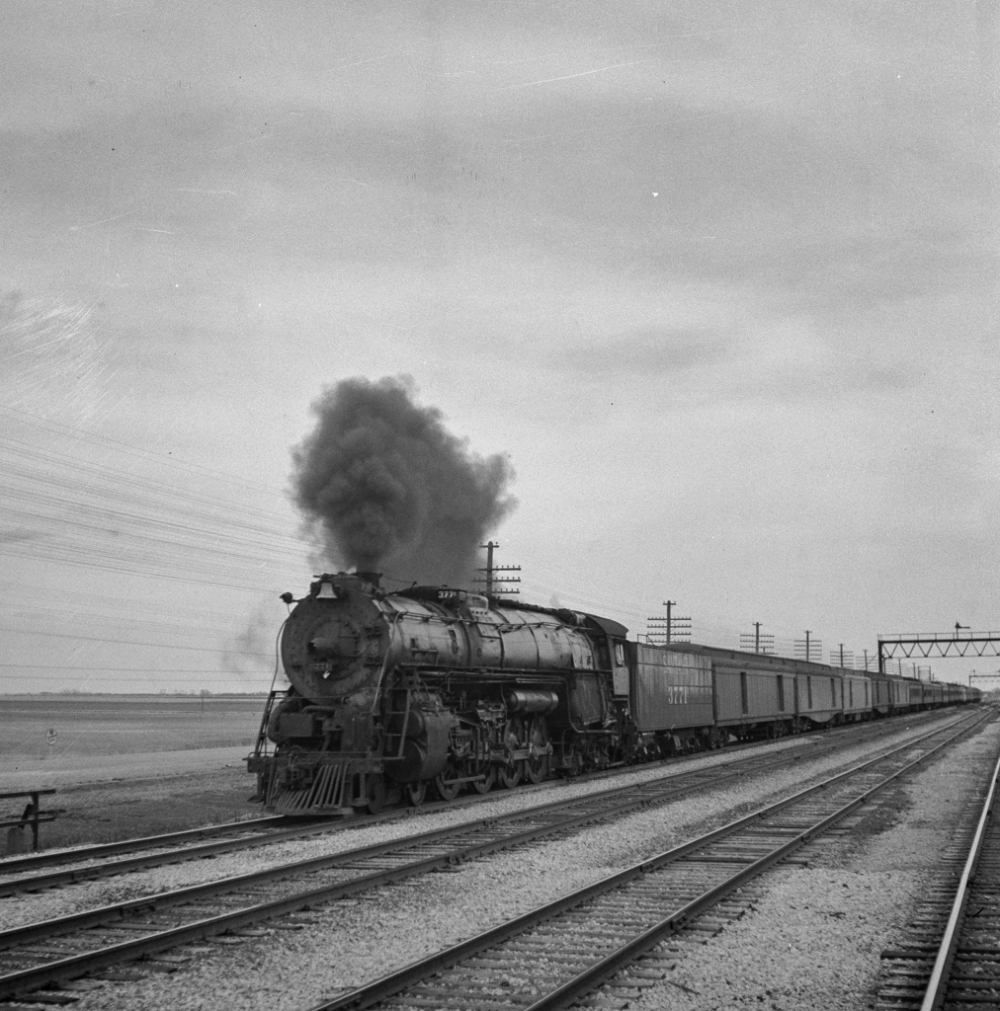 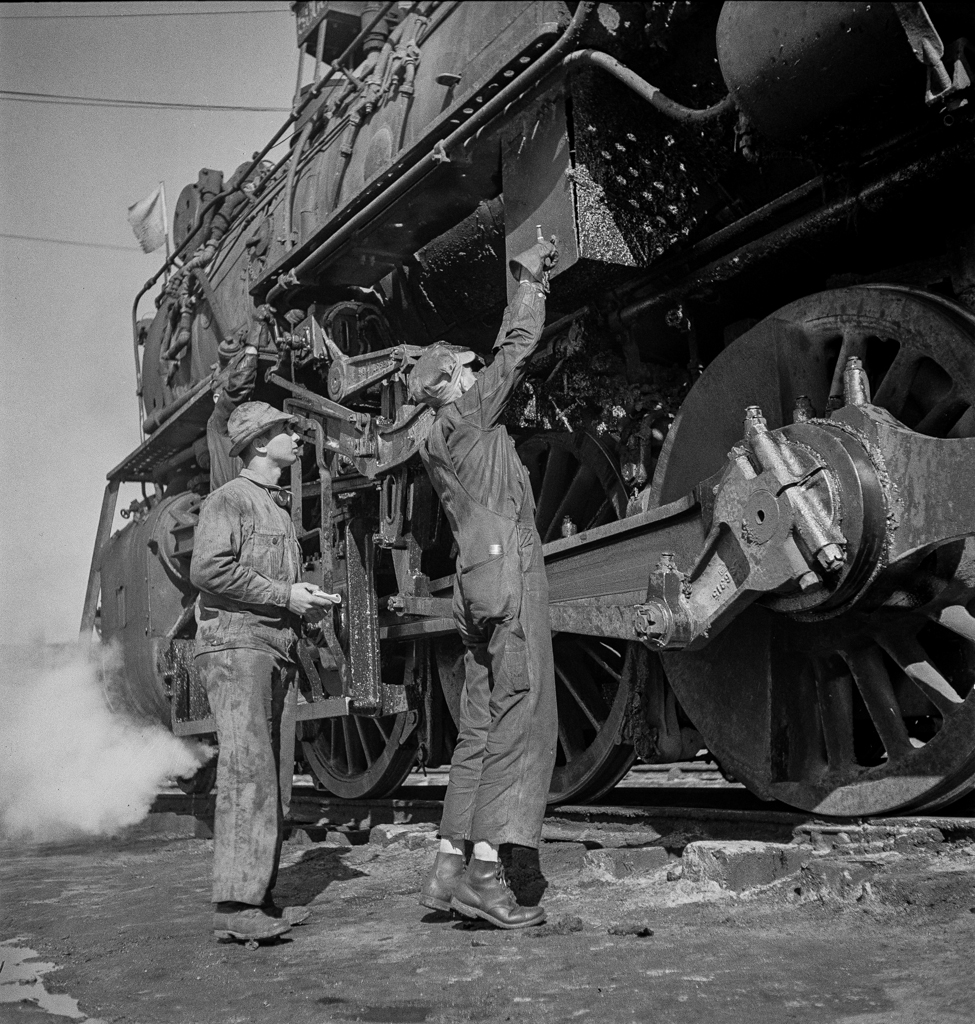 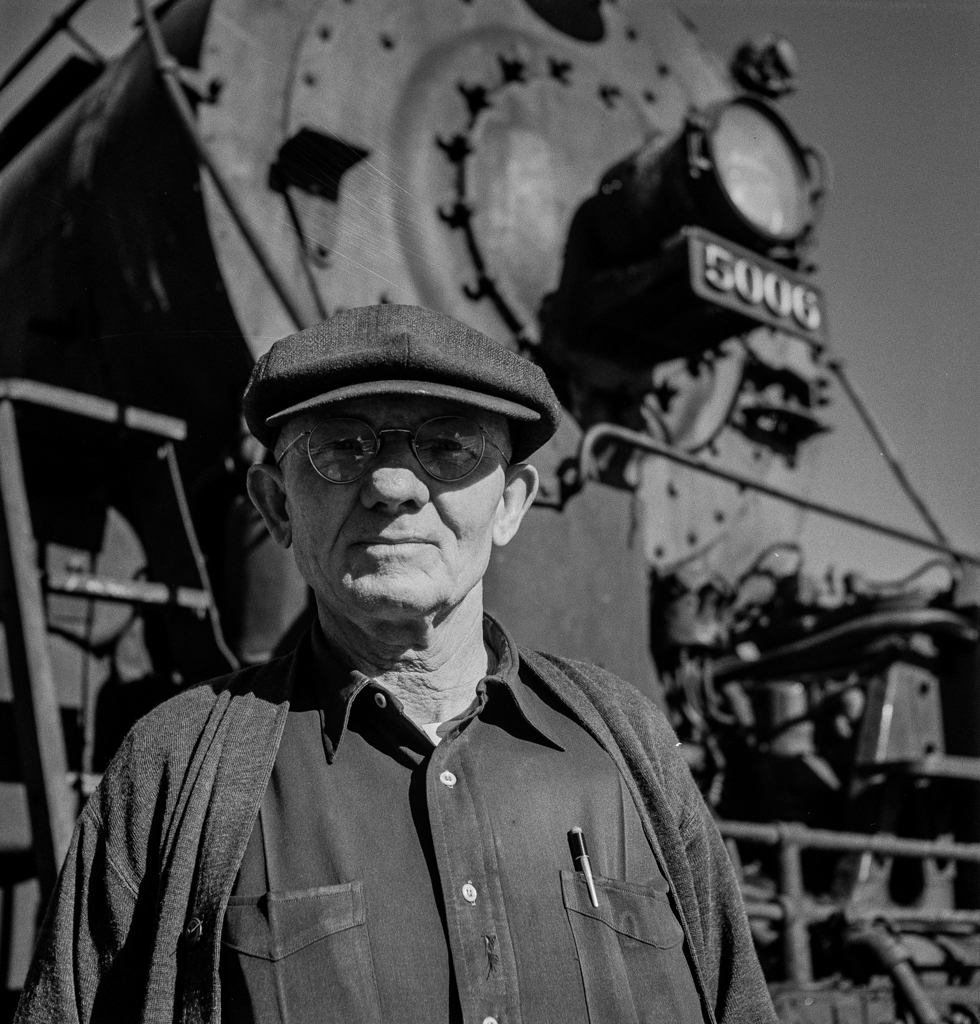 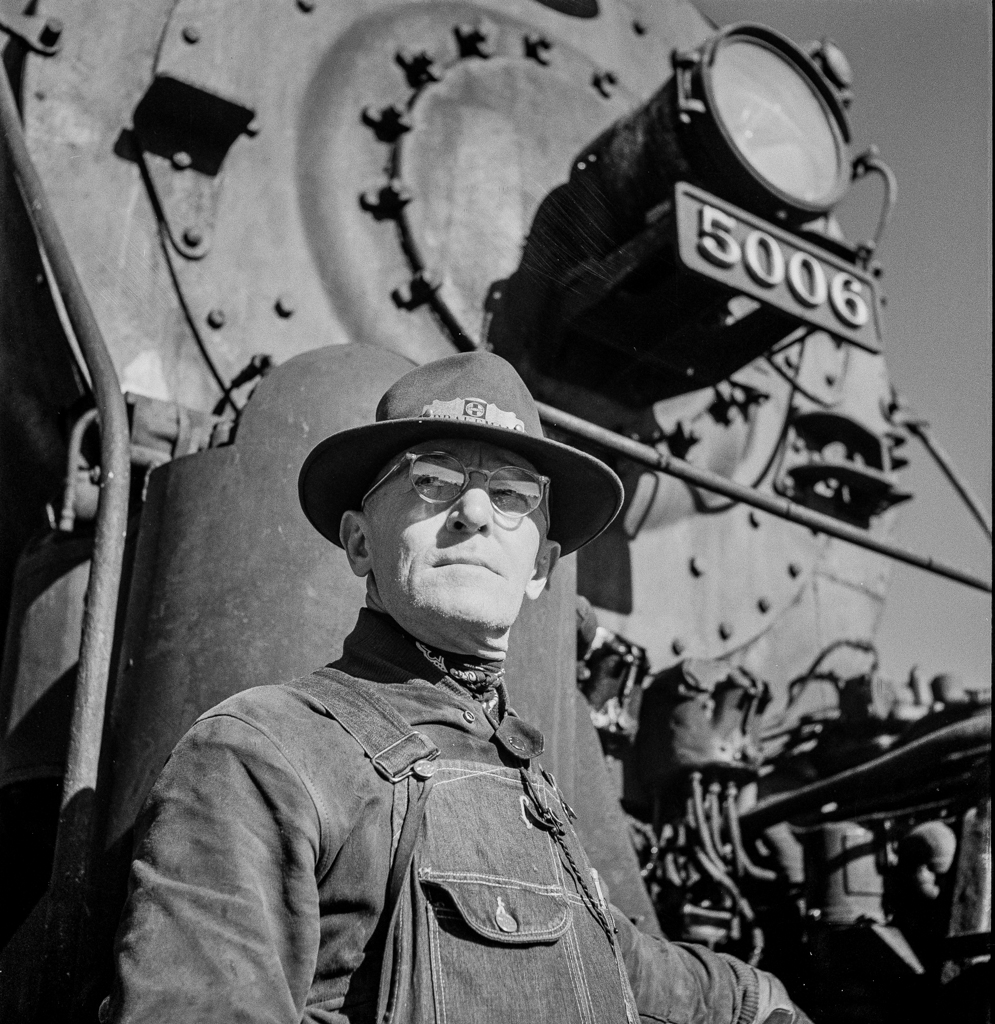 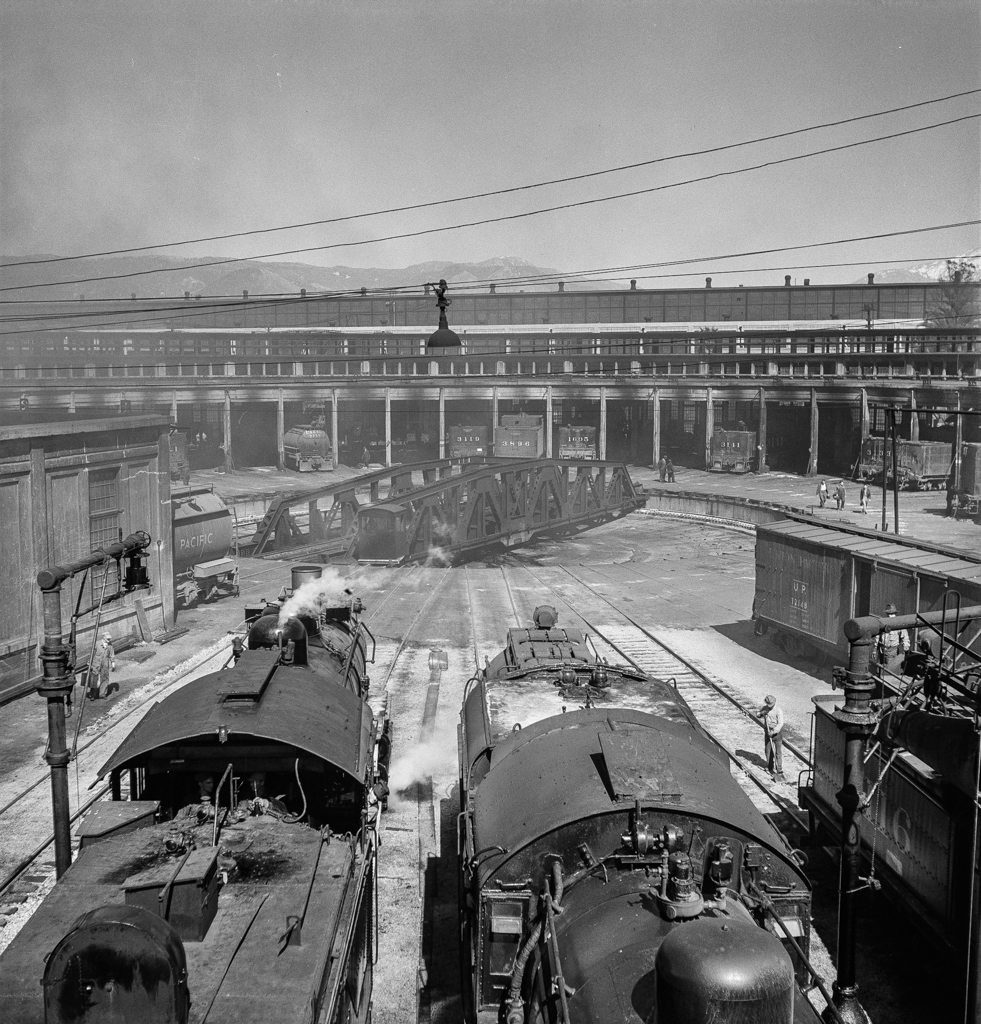 I don’t know how many engines were stabled at San Bernardino roundhouse, but it must have been dozens. The place is vast and lasted until 1995. 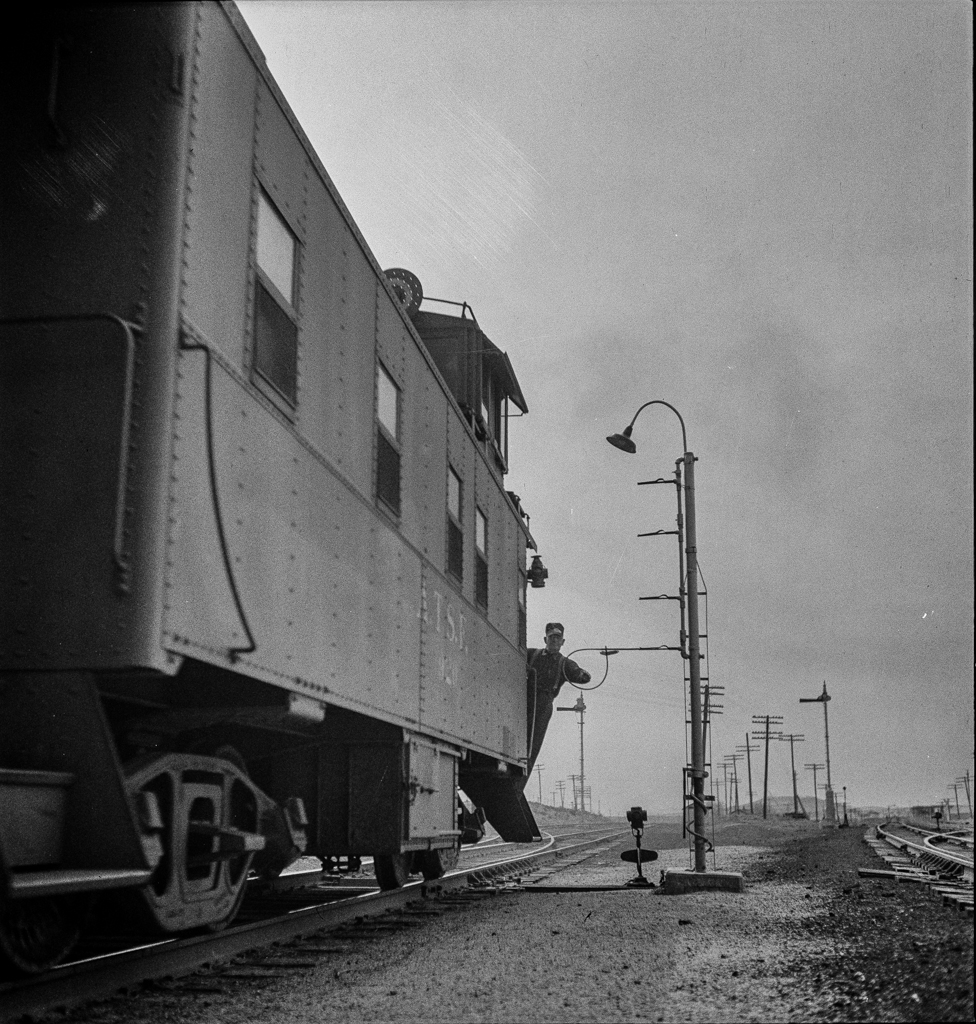 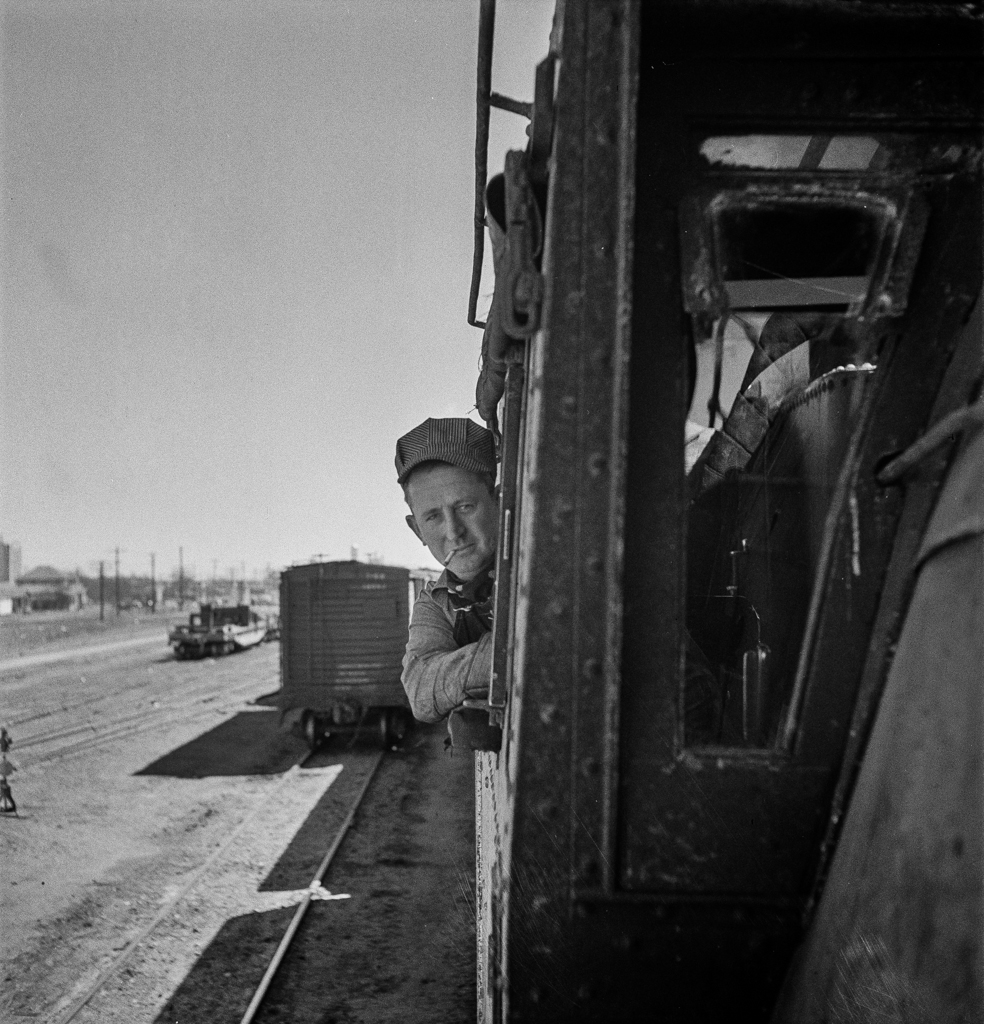 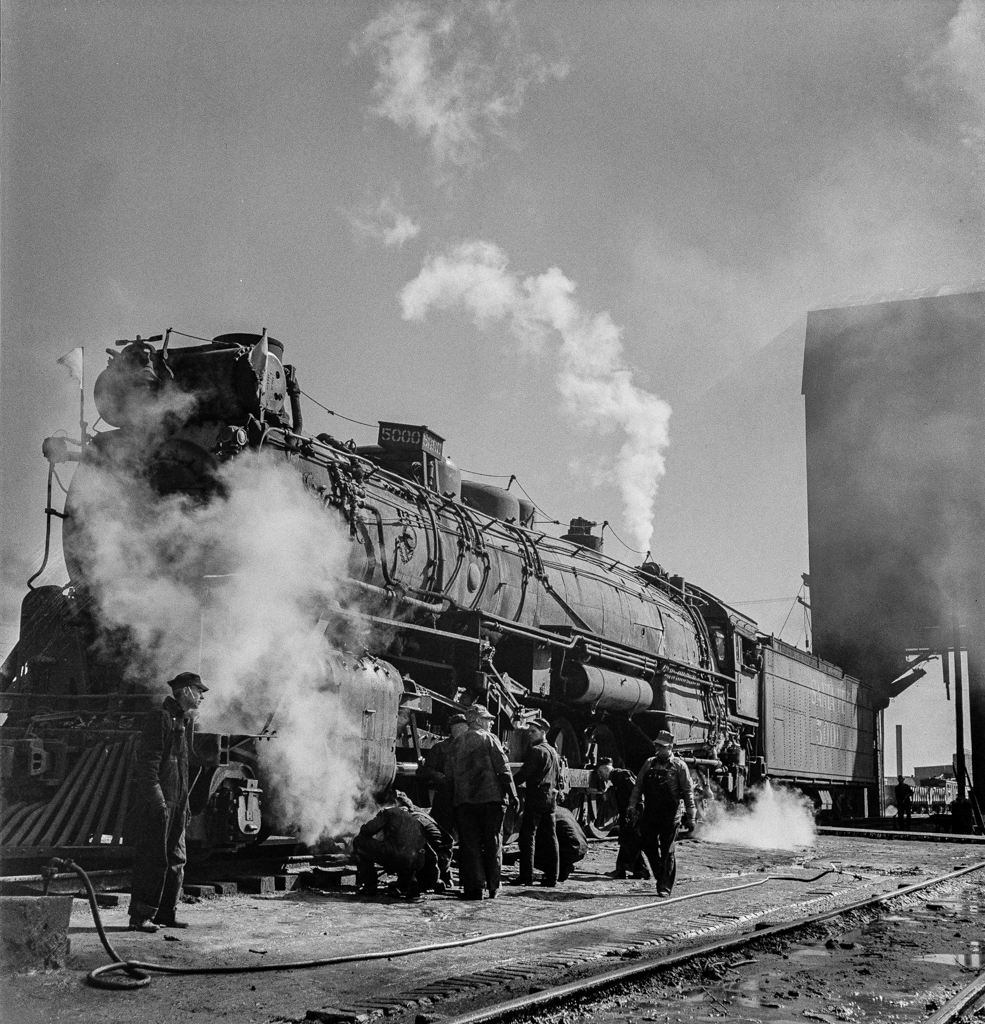 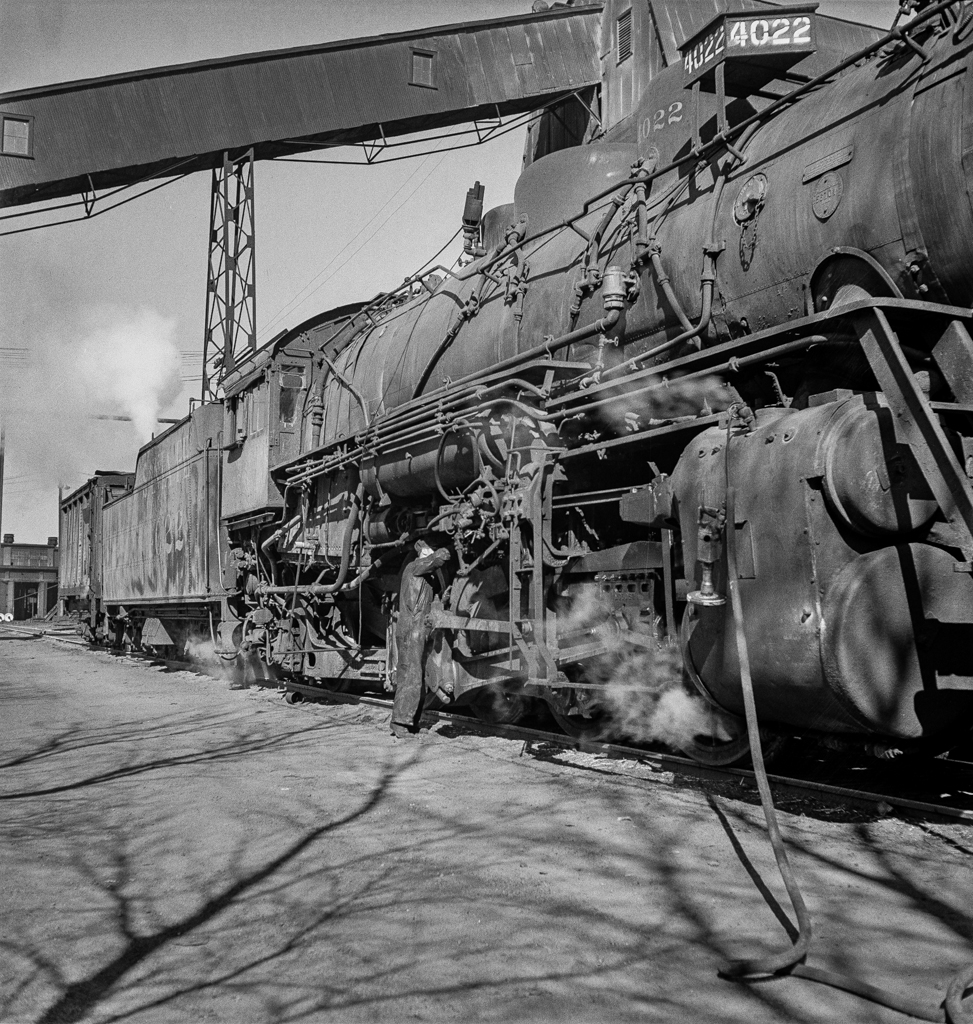 The fitter here seems tiny compared to the monolithic size of the engine and the coaling stage behind. Note also the enormous tender on this locomotive. 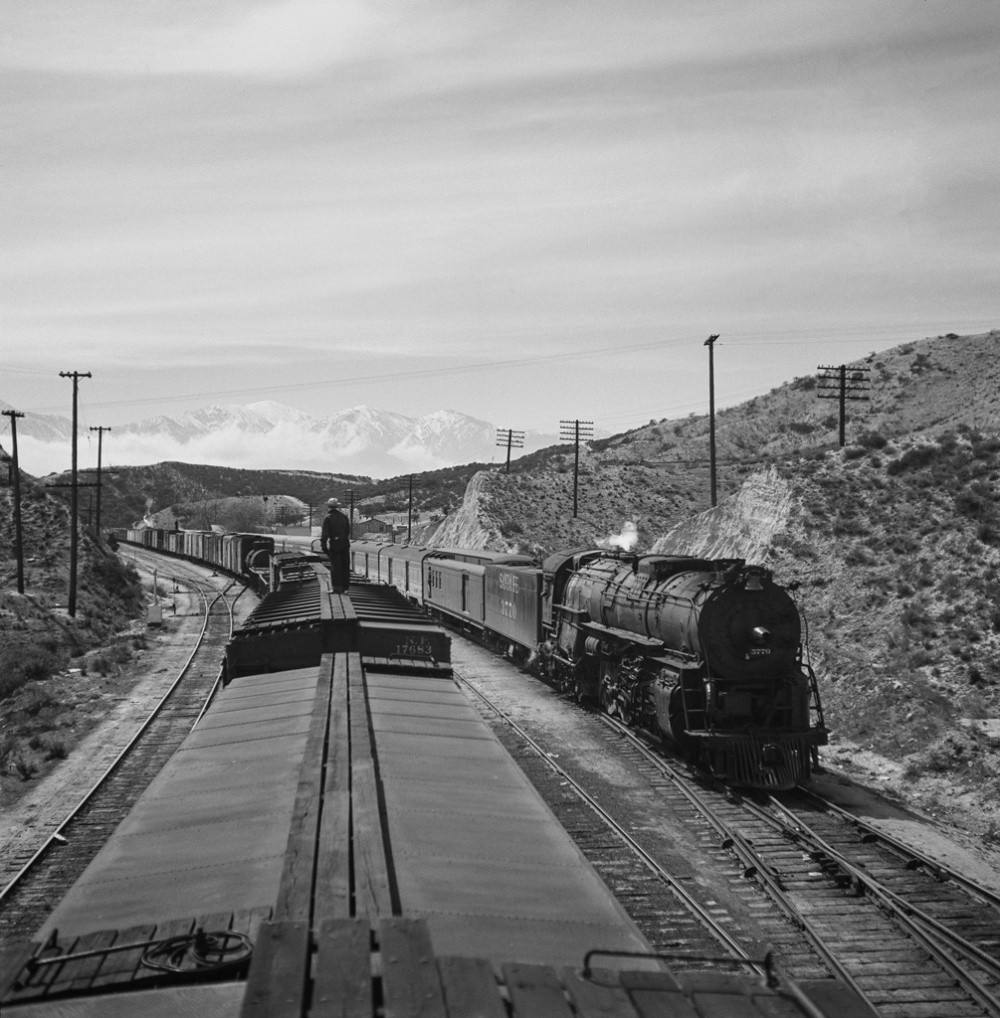 Walking the roof of the train. Something uniquely American about this.