I’ve heard a lot about the industrial photography of Bernd and Hilla Becher over the years, but from the work that I’d seen, I just couldn’t get excited about it. OK, I’ll be the first to admit that this field isn’t exciting in the same way that, say, motorsport photography is, but all the same, the books I’d seen were just lots of architectural studies of water towers and other structures. I never really understood their typological style of presenting their photographs, but maybe that’s a reflection in the lack of maturity in my tastes. From a technical perspective, they are excellent, and maybe they are interesting and useful from an architectural / historical perspective, but to my uneducated eye, they lacked any kind of imagination or creativity.

It was only later that I discovered that they had also published a book of industrial landscapes, imaginatively titled ‘Industrial Landscapes’. In this they appear to have taken a few steps back from their usual positions and taken in the wider landscape to give more context to the subject matter, and this style of photography reminds me of the work of John Davies.

The book is quite a broad study, of traditional manufacturing areas in the USA, Germany, France, Britain, Belgium and Luxembourg. It would be interesting to see similar work done in the former Eastern Bloc, or in India, China and Brazil.

I found it interesting to note the different styles between countries, especially coal mines. Mines in the UK were pretty consistent in their functionality and lack of embellishment, but the designs of those in Continental Europe are many and varied. The inclusion of the rickety wooden mines in the USA is a comical contrast to the rest, and reminds me of some I’ve seen in photographs from China. 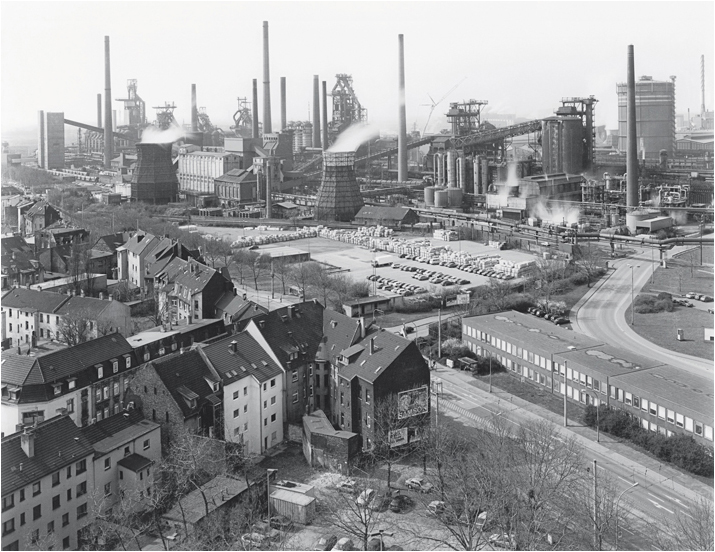 The photographs in this book are different from the usual Becher images in that they’ve deliberately included other elements of the urban landscape, especially houses. I suppose industrial areas are all the same in that houses are built right up to industries, you only have to look at your archetypal northern street scene of rows of terraced housing with a large cotton mill and chimney, towering over. A steelworks is a somewhat different proposition though. Plate 94 of the Terre Rouge plant in Luxembourg takes this to extremes, with a gigantic conveyor crossing right over a row of houses, and the steel plant right across the road to the front. The residents are quite literally living in its shadow.

The body of work focuses heavily on steelworks, coalmines with smaller sections on dock warehouses, grain towers, gas holders and limekilns. This is very much an aesthetic study, and it is often about the juxtaposition of visually complex structures such as a bank of blast furnaces on the landscape. These are what held my attention, less so the grain towers, these images are more of a study of the structure itself, which while moderately interesting from an architectural perspective, are basically just images of the buildings. Their place in the landscape is maybe less interesting as they tend to be quite isolated structures, especially those in the flat, featureless American Midwest. There again, are these not missed opportunities to photograph them in that environment.

I came away with a different perspective on the Becher’s after this book. I liken the images in this to informal environmental portraits, rather than the stiff posed studio-like portraits of the typological work. That’s not to detract from the rigour in which the Becher’s approached the landscape work, far from it, as they themselves said in the interview at the front of the book that landscape photos are more a composition than anything else.

A fascinating interview with the Bechers can be found here and another shorter one here.