I mentioned in the first post in this series about the quality of the glass plate negatives in the Library of Congress archive.  I love looking at these images at 100%, it’s not so much pixel peeping as seeing what is in the image as they are so big. They are scans from 8×10 negatives and were probably rated at an ISO of something very low (probably less than 10 but I have no specific information) so the resolution is incredible. They have been scanned / rephotographed on a Sinar 54H and the Tiff files are around 150mb, so there’s an enormous amount of information. In fact, given that the Sinar is a medium format back, I dare say that there is probably more detail on the negatives than the sensor can pick up. These could easily be printed at A1 with massive detail, in fact I might get one done out of curiosity. I’ve downloaded a few and tidied them up a bit – dust and scratch removal plus some contrast adjustment to make up for the flatness of the scans.

This is a really busy scene. The initial thing you I saw was the team of men painting the ship, and then the men on the bow looking at the camera. There seems to be some kind of re-supply operation going on with a line running from the dockside fo the ship that has a container running along it. There is a good crowd of bowler hatted people on the dock observing the activities. Up on the mast on the superstructure, two sailors are doing something, maybe cleaning the smaller guns. 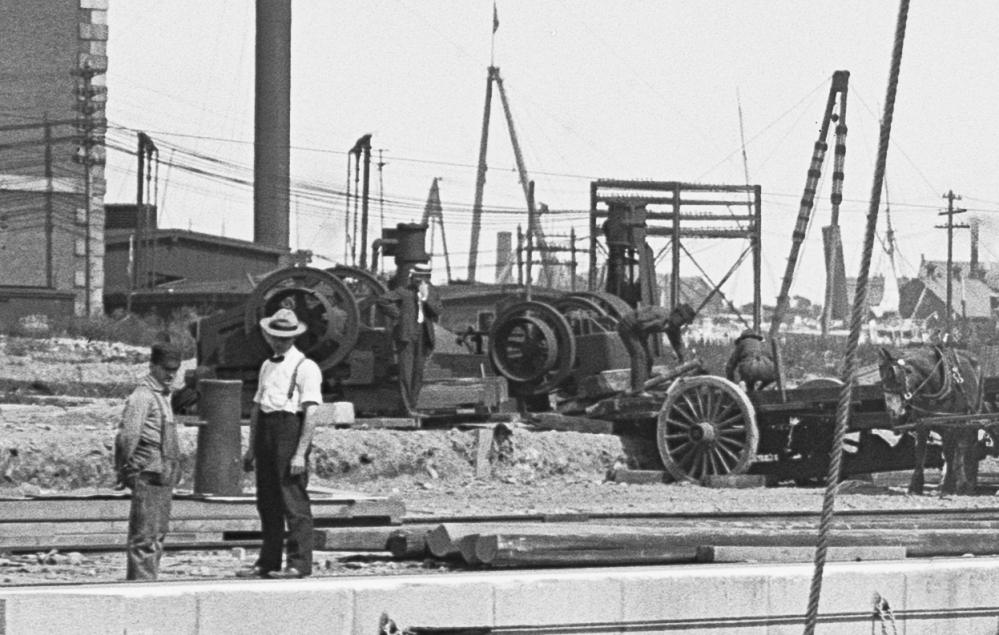 This late 1890’s / early 1900’s type of battleship were known as pre-Dreadnoughts, as they were all made obsolete when the Britishnlaunched the HMS Dreadnought in 1908. You’ll notice the characteristic sloped bow – these were standard for the era and early ships had them reinforced for ramming, which was considered an important tactic / weapon of the era. However, it ultimately fell out of vogue as in reality ships rarely got close enough to each other to engage, mainly thanks to improvements in naval gunnery.

There is something quite stylish about these ships – the pristine white hulls, the elaborate crests on the bows and wooden bridge house show an element of Victorian panache combined with the menacing array of guns present – this thing is like a floating fortress!