The thing I like about Beamish is that despite it being a museum, it all feels real. Unlike Disney, who manage to suck the life out of everything in their sterile make-believe theme parks, everything at Beamish is real, and not only that, most of the buildings existed elsewhere before being taken apart and re-sited at the museum. Sure it’s all a lot cleaner than it was in 1913 (the approximate year that the museum has pitched itself as being representative of), and there’s not much horseshit in the streets, but the look and feel is bang on.

Adding to this at the Great North Steam Fair was the large numbers of visiting steam engines, buses, steam rollers, vintage cars and trucks, motorbikes, trams and even bicycles, all driven by people in period dress. The excellent main street with its shops and businesses, houses, Bank, Masonic Hall, Garage, etc, felt like a set from a period drama as we got off the old bus that had brought us round from the entrance.

From a photographic perspective, it’s target rich, but as I was with my 2 year old,  my wife and my parents, trying to take some nice photos while keeping track of the family whilst pushing a push chair round and avoiding passing vehicles was somewhat challenging. After bumping into my friend, the railway photographer Nigel Valentine, who was busy taking shot after shot of the trams, bikes and goodness knows what else, I got slightly envious! 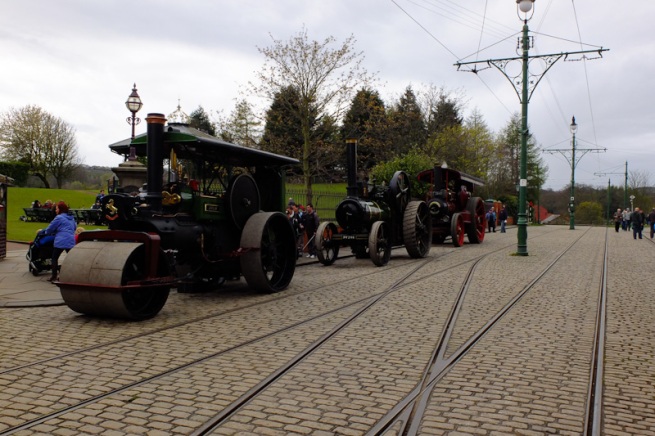 Steam powered line up. The owners of the visiting engines seemed to have the freedom to drive round the site as much as they liked, which was good.

Foden and tram – I’d forgotten how nice trams are. Modern ones like the Metrolink in Manchester are a bit bus-like, but being able to move quickly and quietly through town streets is ace. There were various old ones in use at Beamish and my trip on this one was most agreeable.