Colliery headstocks were once a common site in the many mining areas of the country, but with the decline of the industry, these industrial landmarks are now virtually extinct. Colliery closures tend to result in a rapid demolition, witness to that is the speedy clearance of Welbeck colliery that I photographed in 2008. Even those that are nominally spared demolition are not safe – Clipstone, look doomed, and the Annersley colliery headstocks were eventually demolished after being left marooned in a desolate wasteland for several years. And of course there is the sorry state of the former Chatterly Whitfield Colliery museum in Stoke, which since closure in 1993 has deteriorated into an unsafe state.

However, at the other end of Stoke lies a forgotten colliery – Foxfield. Closed in 1965, the site was sold shortly after by the NCB and while some of the site has seen demolition, much remains. For some reason, the headstocks were never cleared, and they still stand, over forty years later. My guess is that their concrete construction was of little scrap value, so unlike their adjacent steam winding engine, they were left to rot rather than being cut up.

Like most collieries, the mine was served by a railway to provide a link to the mainline and in recent years, the Foxfield railway has managed to relay the line to the colliery. Although they are not yet operating passenger trains to the site, they do operate demonstration coal trains at their galas, as the gradient up the bank from the colliery is the steepest adhesion worked line in Britain (i.e. it doesn’t have a rack like the Snowdon mountain railway). And having seen the line, I can confirm that this is a surprisingly steep hill, and requires an engine to work hard, which is this was the venue for the latest photo charter I attended.

The engine for the day was not really authentic to the surroundings or even suitable for the job of hauling wagons up the bank, but what the hell, I don’t get hung up on authenticity. The engine was a crane tank built for the Shelton steelworks in Stoke, and I was intrigued to see it in action, having never seen one before. It’s a funny little engine, but quite characterful, and almost cartoon-like with it’s long overhangs and huge crane jib.

Signs of a glint! The wind is blowing the exhaust all over the place, but at least there was some colour in the sky.

Well, there’s the glint, or as much as you’re going to see from a watery December sunrise in Stoke. I’ve underexposed this a bit to emphasise it a bit. 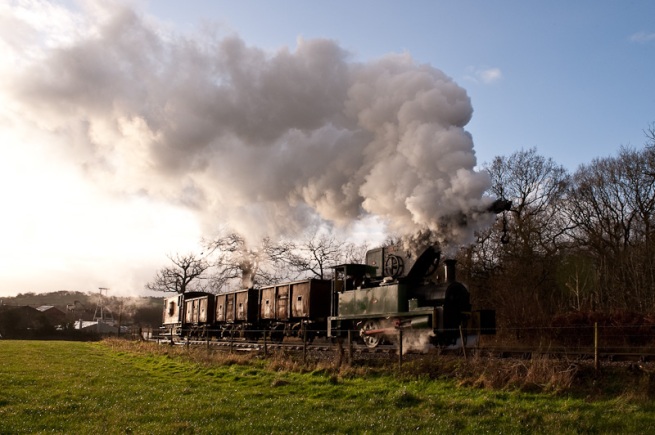 A wee bit later on and there’s more light. I moved down the line a bit but I lost the best position for the glint. 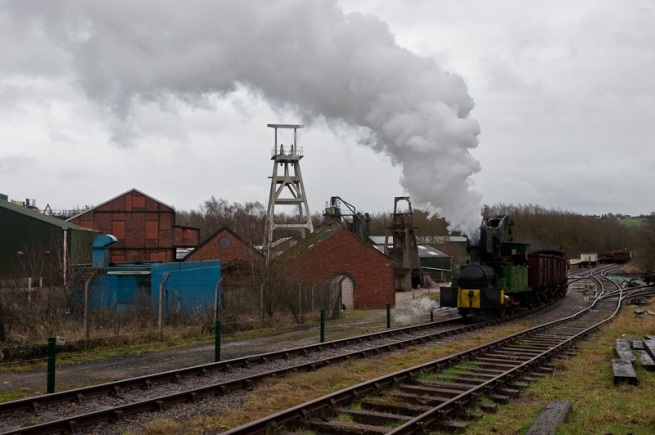 Back down by the colliery, and the early morning light has gone and the wind is still strong. I managed to capture this one just before the smoke obscured the headstocks. You can see from this that the engine is climbing uphill, but it’s difficult to judge the grade here.