When I was a kid, I had a thing about trucks (lorries). I had loads of Corgi and Matchbox’s plus a few of the last Dinky toys made before they closed in the late 70’s. I could name every type of truck out there and during summer holidays would go on road trips with my dad when he visited some of his suppliers, primarily so that I could look at all the trucks on the M6.

In the 70’s and 80’s there was a lot more variety on the roads than we see today with Scammell’s, Bedford’s, Leyland’s, Guy’s, ERF’s, Foden’s, Renault’s, Dodge’s, FIAT’s, Ford’s, Saviem’s, Mercedes, Magirus-Deutz, DAF, Volvo, Seddon’s, Atkinson’s, Seddon-Atkinson’s and probably more that I’ve forgotten.

The consolidation of the UK truck manufacturing industry in the 80’s and 90’s spelled an end to many of these brands and resulted in many factory closures. British Leyland (who owned many of those brands and factories) were sold off to DAF, who shortly after went into insolvency. The result was a rationalisation of factories and the only bit to survive is the Leyland Assembly Plant in Leyland (owned by PACCAR). GM owned Bedford stopped making trucks and now just make vans, Seddon-Atkinson got bought by IVECO and vanished, Ford trucks became part of IVECO, Foden were bought by Paccar who transferred production to Leyland then ended the brand completely, ERF were bought by MAN who closed them down. The upshot of this is that we now have a fairly small number of manufacturers vehicles on the roads.

As alluded to above, the British truck industry was once huge, with much of it being consolidated into the British Leyland group, based just up the road from where I live. There isn’t much left to see there now, with just one factory left (which is – currently – still producing vehicles, although I’m not sure of it’s future post-Brexit) whereas at one time the plant stretched for miles.

One of the brands was Scammell, a company renowned for its heavily built vehicles, and especially its heavy haulage vehicles. Indeed in 1929, Scammell built possibly the first vehicle capable of pulling 100 tons, the appropriately named 100 tonner.

Post war, the company got absorbed into British Leyland and continued to make vehicles into the late 80’s. One of the most distinctive was the Routeman / Trunker / Hamdyman series which had a fibreglass cab designed by Giovanni Michelloti (he’d also designed for Maserati, Ferrari but also did the Triumph Herald).

Many Scammells ended their lives with showmen, with huge generators bolted onto the back and towing several trailers. I remember wandering round behind fairground rides looking at all these 20+ year old wagons with homebuilt bodywork and shortened or lengthened chassis, their generators grumbling away, belching out smoke that combined with the smell of candy floss, grass, burgers and sick for that distinctive fairground aroma.

This particular specimen was previously a tipper, although it’s lost it’s body and engine at some point. Heck, it’s lost pretty much everything, there’s not much more than the rolling chassis and can left. Up on the wet, windswept moors of Rossendale, 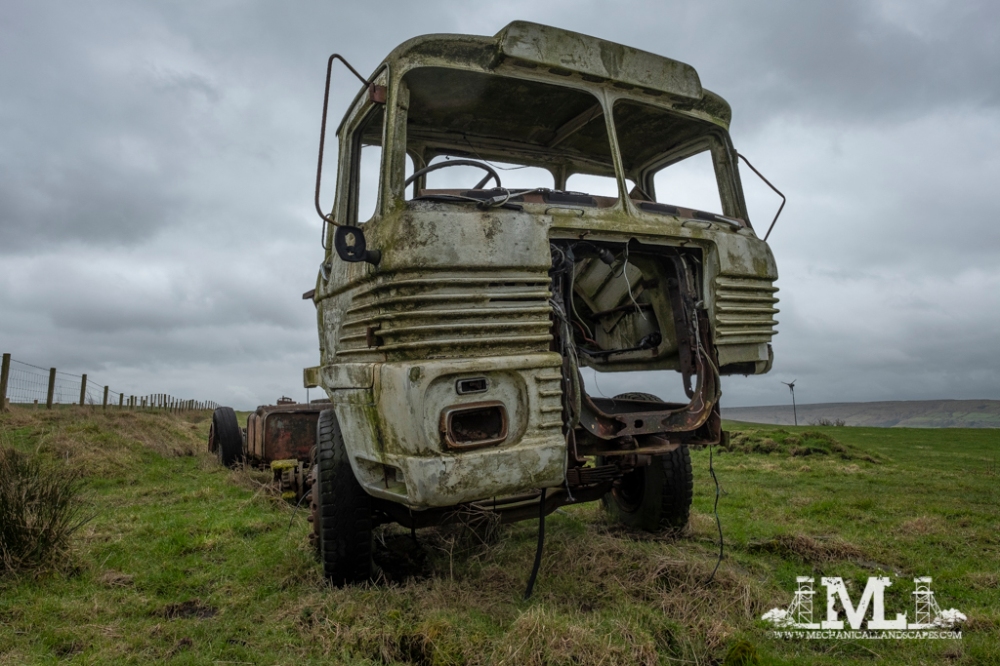 See that blob on the right hand side horizon? That’s the dumptruck below.

I’ve no idea what it is as there was no manufacturers badge on it.