Britain is a pretty compact nation, and you’re ultimately never that far from civilisation. Compared to say America, where you can drive all day and still not get across a state, in Britain, you’d run out of road before running out of day. So to go somewhere by road that is truly in the ‘middle of nowhere’ takes some doing.

The closest I’ve come to this is Grove Rake Fluorite Mine in County Durham. I’d first come across a picture of it in a photographic book several years previous, but had absolutely no idea where it was. And so it remained until I saw a report on 28 Days Later. My curiousity piqued, I did some searching on the internet but came up with nothing. And then another report appeared, so more searching ensued. I knew it was in County Durham, so much searching of Geograph finally gave me a result. Boy, was it remote, but if that’s where the flourite is, then that’s where the mine has to be.

The mine was closed comparatively recently (1999), but unlike British Coal who tear down their closed mines with indecent haste, this place has just been abandoned and left to the elements, presumably because the land is worth sod all, or maybe because their is hope that one day it could be re-opened.

The drive to the area was not one I’d want to do in a harsh winter, but thankfully this particular December was one of our milder ones. The drive to Alston goes through some quite remote landscapes (although the views over the Eden Valley are worth pausing for) but then it starts to get really wild. Miles and miles of nothing but miles and miles.

After stumbling around for a while trying to find the exact road, I suddenly spotted the headgear at the bottom of a remote, windswept valley. The wind was moving the clouds along at a fair old lick, which meant that lighting conditions were constantly changing, but this being late November, the sunlight was fairly weak.

Parking up on the main road for a wider shot, I struggled to compose a shot I liked, and I’ve still never been able to process the photograph into anything I’m something like happy with. I think there are just too many different tones and textures, and the sky doesn’t help. I do keep coming back to it every year or so, maybe I’ll get there one day.

Realising that this was a road that was used only a few times a day at best, and no-one lived nearby, I took the unusual step of moving my car closer to the site, and leaving it at the top of the access road. My pre-prepared excuse was that the access road was also a public footpath that actually ran through part of the mine, but I didn’t see another soul for several hours.

Having the place to myself and not having to keep an eye out for security or worry about access, I had a nice relaxed wander round. There were once two headstocks, as well as a couple of adits, but the smaller headstock was apparently nicked by pikies, and a lot of the surface infrastructure has also gone.

However, the large headstock is still there, and I suppose that was the main attraction. I was surprised at how crude the structure was, compared with some of the coal mining structures I’ve seen, being mainly angle iron. Perhaps because of this, and the howling wind, it creaked like something out of a horror film. Although the first flight of steps onto the structure had been cut away, a strategically places piece of rope would have made it accessible, but being on my own, I erred on the side of caution as I didn’t fancy being stuck there, or falling off it, as the chances of being found were probably nil. Ditto the adits, I have very little underground experience, and you really need to know what you’re doing underground, and have the right gear, and ideally be with several other people.

This wild, barren place brought to mind the the South Wales Valleys, and how it must have been in days gone by – crude equipment, minimal infrastructure and remote windswept locations. I don’t envy the men who had to get up here everyday and then go underground for a shift before making their way home again.

Looking up. The shaft has been capped thankfully, otherwise I’d have needed a large telephoto to take this.

The crudeness of the construction can be seen in this photo. Note the rope hanging from the balcony, doubtless this would have afforded access if I’d wanted.

Well worn steps from the office / bath house up to the pit. 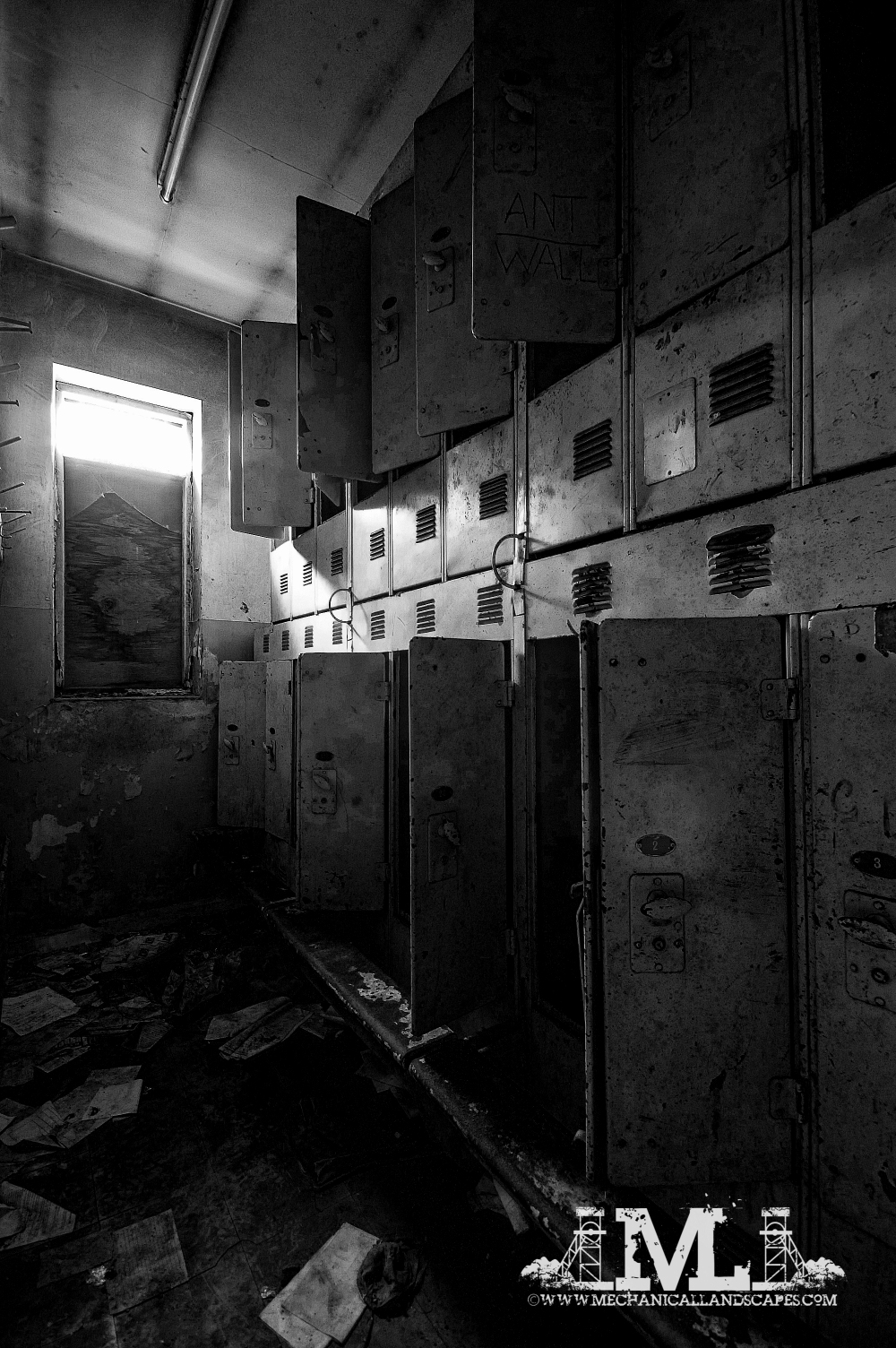 One of my two favourite photos from the day. I’ve long thought that headstocks are the most iconic industrial structure, and this image stood out as they seem to be a symbol of strength and resilience over the chaos and decay in the foreground. Just wish I’d been able to compose it more central in the window….. 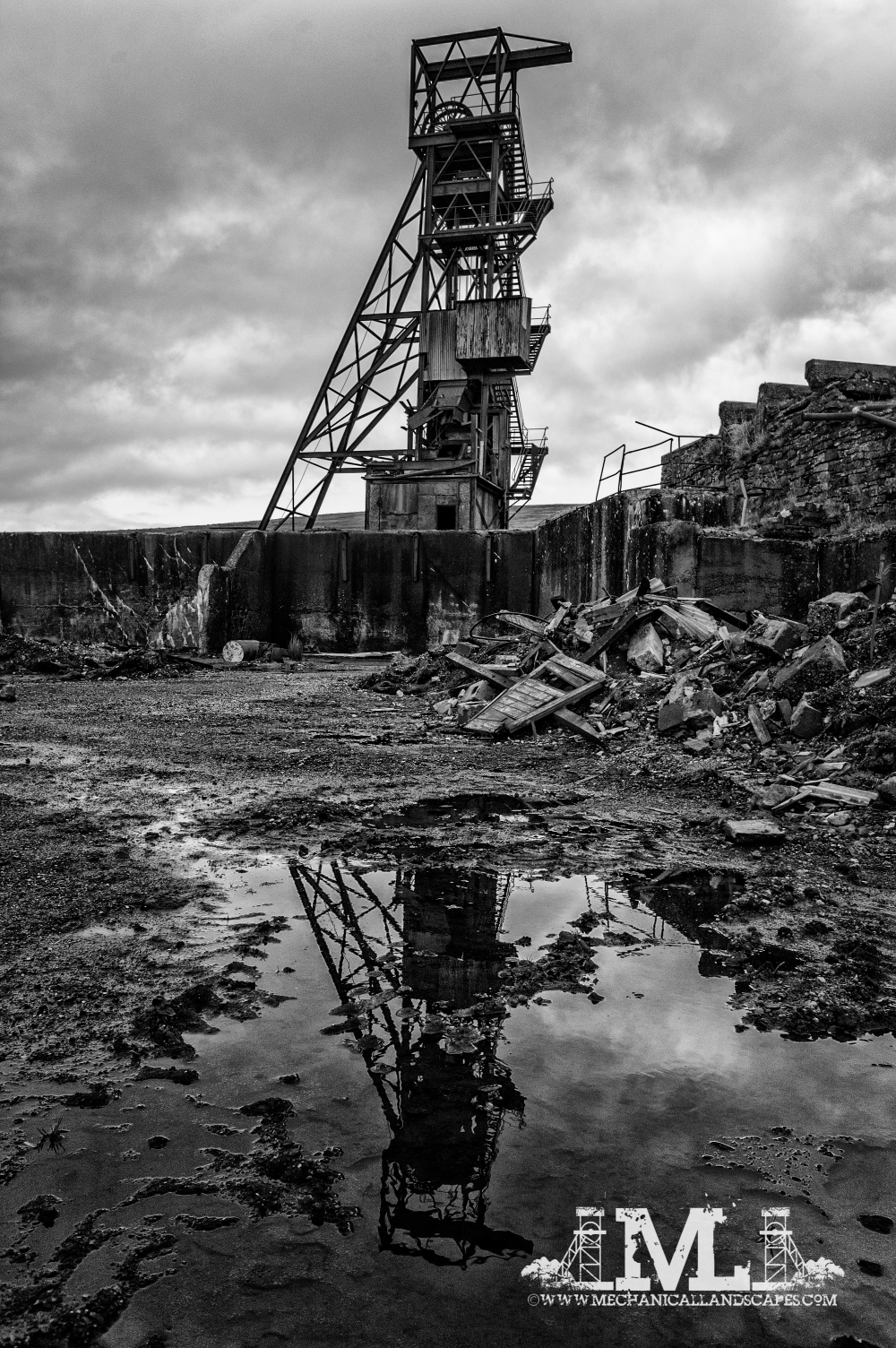 Just as I was leaving, I noticed amongst the rubble, a reflection of the headstock. Never being one to think twice when I see a reflection, I quickly grabbed a few shots. It’s needed some work on the sky to get the effect I wanted, but it’s one of my favourite industrial photos to date.